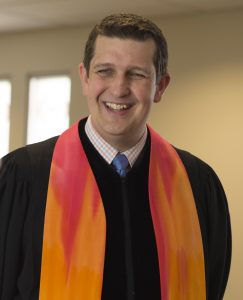 Dan grew up in Albuquerque, New Mexico as a Presbyterian, but drifted away from the church and faith of his upbringing after high school. As a young adult he identified as a spiritual seeker, an identity that allowed his personal theology to become broader, more expansive, and more inclusive of the myriad possibilities of how to understand the Divine. “We are all theologians, in that we are all called to wrestle with our beliefs about who we are and how we relate to others and the world around us, and of which we are a part,” he says. “We must be willing to challenge ourselves, for it is when we are challenged that growth and transformation are possible.”

By his mid-20s, Dan’s appetite for theological exploration and his thirst for spiritual community were both strong, and finding Unitarian Universalism at that moment in his life was exactly what Dan needed to fulfill his theological and spiritual needs.

Unitarian Universalism’s healing, life-affirming message came at exactly the right moment in Dan’s life, and he has since made it his life’s purpose to serve and grow the living tradition of Unitarian Universalism, through which people can experience the transformative power of beloved community.

Dan shares that “the single most important role of a minister is to grow the beloved community. This is accomplished in so many ways, and the scope of this work is far more than anyone can do alone. By cultivating beloved community, a minister empowers members of the community to hold each other in love and support. In this way, we are all ministers, one to another.”

Dan holds a Master of Divinity degree from Iliff School of Theology in Denver, Colorado. Before being called as the settled minister of Woodinville Unitarian Universalist Church, Dan completed two units of Clinical Pastoral Education (one in Colorado and one in New Mexico) and served for three years on the ministry team at the First Unitarian Church of Albuquerque.

While building the beloved community is Dan’s purpose in life, he is equally devoted to his family: his wife Emily (a pediatric nurse), his daughter Natalie, and their two rescue dogs, Bella and Copper. Dan loves basketball (both watching and playing) and exploring his surroundings, both natural and urban. You are equally likely to find Dan on a hiking trail as in a local brewery or coffee shop. 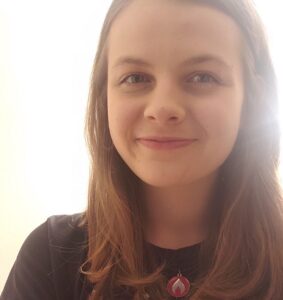 May lives in Lake Forest Park, Washington and graduated from Western Washington University in June of 2020 with degrees in the Global Humanities of Religion and Culture and Theater Stage Management.

May grew up attending the University Unitarian Church in Seattle and became very involved in leadership and is now involved in national UU young adult groups.

May loves to listen to music, dance, play board games and cook.

Matt has been performing in community choruses for over 20 years and has been the director of the Emerald City Voices since 2011.

He graduated from Western Washington University with his bachelor of music education and has continued to share his life-long passion for singing through schools and communities!

He is committed to the growth of musical excellence and the enjoyment it can bring out in everyone, and excited to be a part of WUUC!

Raised in Southern California by a psychiatrist dad and an artist mom, Terry took to the piano so naturally at age 4 that music clearly chose him rather than the other way around.

He’s been writing his own music since the age of 7. First trying to write like an early influence, George Gershwin, then for his own rock and fusion groups, and then for original stage musicals. To date he’s got umpteen credits for those, numbering among them quite a few children’s shows. He has acted in “Casablanca, Casablanca” (a movie musical) and “War of the Currents” (about the relationship between Tom Edison and Nikola Tesla).

Terry finds his current gig as a church pianist to be an enjoyable challenge. Each Sunday he partners with the many varied musical folk in the WUUC congregation to arrange a wide variety of musical styles. He performs and accompanies all genres of music, bringing a sense of adventure and surprise to worship services.

Originally from Hollywood, FL, Devrah and her family moved to Snohomish in 2005 and absolutely love the Northwest. Devrah is happily married and has one daughter and two stepdaughters. She’s an author, a bookkeeper since 2005, and a homemaker. She enjoys traveling, reading, exercising, and staying home to cuddle on the couch with her husband.

Jennifer Ikeda has been a passionate educator for over 20 years.  She has earned her graduate Master in Teaching degree and her undergrad Wildlife Science degree.  Her methodology is based on experiential learning, an understanding of both learning and developmental processes, and a focus on fostering self-efficacy in youth.

Known for her exuberance and for her ability to tailor activities to individual needs, she has taught babies to adults and every age in between in a wide variety of subjects and situations.  She has also traveled all over the US and the world, learning from various ecosystems and cultures.  Jen is excited to spend quality time with your amazing children, playing and learning together.

Manny resides in Kent. He is the proud father of a lovely daughter. He has been with WUUC for 13 years, caring for our facilities and sharing love with our community. He works as a fiberglass equipment assembler full-time.