Notes 4 Earth: The Future We Choose 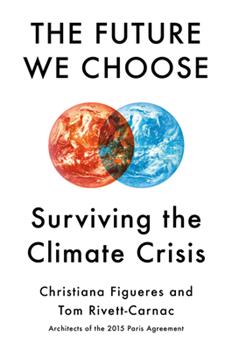 “Impossible is not a fact. It is an attitude.” Authors Christiana Figueres and Tom Rivett-Carnac remind us that optimism is not the result of happy outcomes. It’s the mindset which we cultivate in ourselves and which moves us forward to succeed against that which appears too unrealistic to achieve.

One of the false mindsets that we as humans adhere to is that of scarcity. It leads us to compete, to hoard, to take too much at the expense of others. We believe that in order to get ahead, someone else must lose out. The authors give the example of the perceived water shortage in Tucson, where the actual rainfall is greater than the municipal water actually consumed annually. In situations of true scarcity, such as in the aftermath of natural disasters and even terrorist attacks, the way human beings most often react is in a collaborative fashion. The authors propose that such collaboration is the necessary, indeed the only option for dealing with the climate crisis. Changing our mindset is an absolute necessity for a successful outcome.

Developing this idea further, the authors argue that no amount of carbon budgeting is viable. We shouldn’t be negotiating each country’s allowable amount of carbon production, or how much carbon is acceptable for each individual worldwide, because these methods follow the model of competition rather than collaboration. We’re all in this together and we all need to pull together with a new zero-sum model. We need to believe with stubborn optimism that we can do it. The authors themselves did the “impossible” as they helped to construct the Paris Agreement of 2015, an achievement they themselves had doubts about in the very beginning. Their first act was to change their own thinking.

One of the next steps is to move away from the conventional “linear growth” model we’ve been following, which relies on extraction. We are now called to pursue regenerative growth. Rather than thinking in terms of extraction, we need to think in terms of actions which support humanity and nature. Nations must change their collective thinking, realizing that when all nations work to reduce carbon emissions everyone benefits. This thinking begins with ourselves on an individual level. Connecting with nature is regenerative; and restoring nature and ecosystems is necessary for us to survive on a physical and a psychological level.

The authors provide an array of ideas and facts to consider. This is an easy-to-read book with a real “Wow” factor; a refreshing outlook which leads the reader to the realization that bringing the earth back to a state of health is achievable.

(The next newsletter will include a review of the final part of “The Future We Choose,” the 10 actions we can take to be on an effective trajectory.)